Jaya Bachchan is celebrating her 73rd birthday today. Abhishek Bachchan shared an old picture of his mother to wish her on her special day. Hrithik Roshan took to the comments section to shower love on the actress.

Jaya Bachchan born on 9 April 1948 is an Indian film actress, politician and a member of Parliament in the Rajya Sabha from the Samajwadi Party, notably serving four terms since 2004. She is particularly known for reinforcing a natural style of acting in both mainstream and “middle-of-the-road” cinema. During her career, she won nine Filmfare Awards: including three for Best Actress and three for Best Supporting Actress. She was awarded the Filmfare Lifetime Achievement Award in 2007. In 1992, she was awarded the Padma Shri by the Government of India.

Making her film debut as a teenager in Satyajit Ray’s Mahanagar (1963), Bachchan’s first screen role as an adult was in Guddi (1971), directed by Hrishikesh Mukherjee, with whom she collaborated in several films thereafter. She was noted for her refreshing performances in films like Uphaar (1971), Koshish (1972) and Kora Kagaz (1974), among others. She starred alongside her husband Amitabh Bachchan in several films including Zanjeer (1973), Abhimaan (1973), Chupke Chupke (1975), Mili (1975) and Sholay (1975). 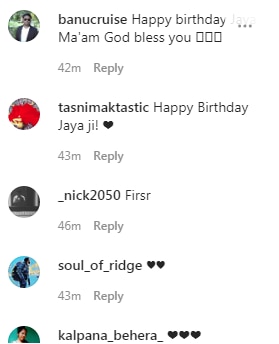 Jaya Bachchan has been away from the big screen for a long time. She was last seen in Kareena Kapoor and Arjun Kapoor’s 2016 film Ki &Ka.

Coming to Abhishek Bachchan, the actor’s film The Big Bull released on April 8 on Disney + Hotstar. The film received mixed reviews from critics. The actor will next be seen in Bob Biswas and Dasvi.

No need to worry about reports of blood clots linked to Covishield vaccine: Virologist Gagandeep Kang

Airtel, Jio, Vi annual prepaid recharge plans with 2GB daily data that you can go for