Union home minister Amit Shah on Friday said the Election Commission of India must take strict action if something wrong was done by any BJP leader in Assam. Amit Shah said this in an exclusive interview with India Today TV and was responding to the EVM controversy in Assam.

On Thursday evening, polling officials in Assam were caught taking an EVM machine in a car that belongs to BJP candidate Krishnendu Paul’s wife.

The Opposition has termed this an attempt to tamper with the EVM and also questioned the Election Commission’s role, asking why the voting machine was being carried in a private car by polling officials.

“I am not aware about details of this case. I was campaigning in South India yesterday. I will get the details. We have never stopped the Election Commission from taking any step. If what you say has actually happened, then the Election Commission must take action as per law. It must also act strictly against those involved,” Amit Shah said.

Earlier in the day, speaking to India Today TV BJP candidate Krishnendu Paul denied allegations of stealing the EVM. He said his driver was in the car and he (driver) helped polling officials because they sought help.

“My driver was in the car. Polling officials asked him for help and he obliged. There was a pass pasted on my car that said I am a BJP candidate. I can’t say whether the polling officials were aware of this or not. We simply helped,” he said.

The Election Commission has meanwhile suspended the presiding officer who was carrying the EVM machine in the car and three other polling officials.

It has also ordered re-poll in a polling booth under the Ratabari assembly seat and a sought a report from its special observer for the Assam Assembly election.

On Friday, the Election Commission issued a statement detailing the sequence of events in the EVM incident.

According to the statement, the polling party of polling booth number 149 in Ratabari constituency of Assam comprised a presiding officer and three polling personnel. They were accompanied by a police constable and a home guard.

After completion of polling at 6 pm on Thursday, the polling party left in a vehicle provided by election authorities and was escorted by an armed escort.

It was raining heavily and their vehicle developed a snag.

“Due to the traffic congestion and the prevailing weather condition, the party became detached from its convoy,” the EC said in its statement. 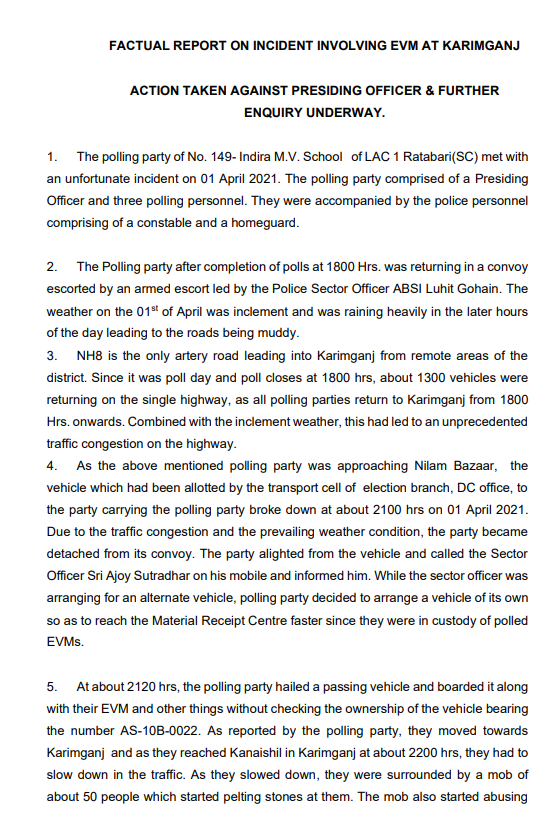 The polling party hailed a passing vehicle and boarded it along with the EVM — ballot unit (BU), control unit (CU) and paper trail machine (VVPAT)– and other things without checking the ownership of the vehicle.

As reported by the polling party, they moved towards Karimganj and had to slow down in the traffic. As they slowed down, they were surrounded by a mob of about 50 people, which started pelting stones at them. The mob also started abusing them and did not allow the vehicle to pass.

When they asked the leader of the mob, he replied that it was the vehicle of Krishnendu Paul who is a contesting candidate of a neighbouring constituency (Patharkandi LAC-2) and alleged that “the EVM was being taken to be tampered with”.

“It was only then that they realised that something was amiss and alerted the sector officer. However, a larger crowd had gathered by then and they were attacked and held hostage by a mob along with the EVM in the vehicle at 2145 hrs alleging that the EVM was being taken to be tampered with,” the EC said in its statement.

“In the meanwhile, the antecedents of the vehicle were ascertained and it was found to be was registered in the name of Madhumita Paul, wife of contesting candidate, Patharkandi LAC No 2, Krishnendu Paul,” the statement said.

Police reached the spot along with district election officer and used force to pull out the polling party. Later, on examination, the polled EVM comprising BU, CU and VVPAT was found to be with its seal intact without any damage whatsoever.

“All the items have been deposited in the strong room,” the statement said.