Akanksha Puri has stirred wedding rumours with Mika Singh with her latest Instagram post. The actress posted a video where she is attending akhand paath sitting beside the singer. Her caption got everyone thinking if the two are already married. She used hashtags like #yearsoftogetherness and #togetherforlife in the caption.

Have a look at the video:

HOW DID THE FANS REACT?

Akanksha Puri’s post was bombarded with congratulatory messages and inquiries if it is an April Fool’s joke. A fan wrote, “Now your choice is better. May God bless you both n stay happy together (sic).” Meanwhile, another fan commented, “Congratulations but April fool to nhi hai na (sic).”

Have a look at some comments: 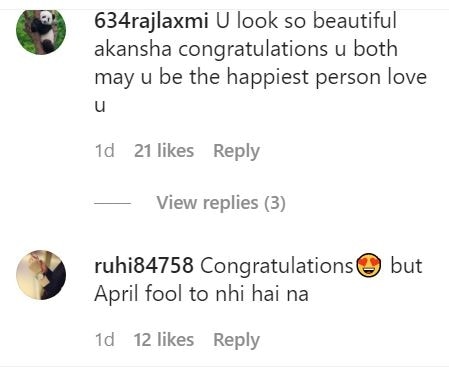 When contacted Akanksha Puri, she said, “Mika and I are old friends. Both of us have a few projects in the pipeline, so thought of seeking the blessing together.”

A fan even called Mika Singh a better choice, hinting at her ex-boyfriend Paras Chhabra. Akanksha Puri and Paras were in a relationship when the latter went on Bigg Boss 13. However, he said on the show that he doesn’t have feelings for her anymore and the relationship is over from his side. He was even seen expressing his fondness for co-contestant Mahira Sharma on the show. Now, the duo is often spotted together. Paras and Mahira have even featured in music videos together.

IPL 2021: Will give more than my 100 percent for KKR, Kolkata is like another home for me - Harbhajan Singh

When is National Anime Day? Celebration of Japanese animation explained – and popular characters and shows

Google on Thursday announced that it would roll out the possibility of location COVID-19 vaccination centers on Google Maps.
8 hours ago

Google on Thursday announced that it would roll out the possibility of location COVID-19 vaccination centers on Google Maps.

Tamil actor Vivekh dies at 59 in Chennai
9 hours ago