Rohit Shetty-hosted Khatron Ke Khiladi 11, which premiered on July 17, is all set to air its grand finale this weekend. The stunt-based reality show was shot in Cape Town, South Africa, months ago. Before the finale, there is a spoiler alert for the fans of the show. Amid speculations of Arjun Bijlani being the winner of KKK 11, his wife, Neha Swami Bijlani, has now confirmed the same as she shared the trophy of her husband’s win. Neha also penned a sweet note for Arjun saying that she is proud of him.

The finale episode of Khatron Ke Khiladi 11 was shot in Mumbai recently and the contestants were papped outside the sets. Putting rumours of Arjun Bijlani winning KKK 11 to rest, Neha Swami Bijlani shared a picture of the winner’s trophy received by her husband. The trophy is shaped in the form of a lion with a flag behind it saying, ‘Darr vs Dare’. We can also see ‘Winner | Season 11’ written on the trophy. 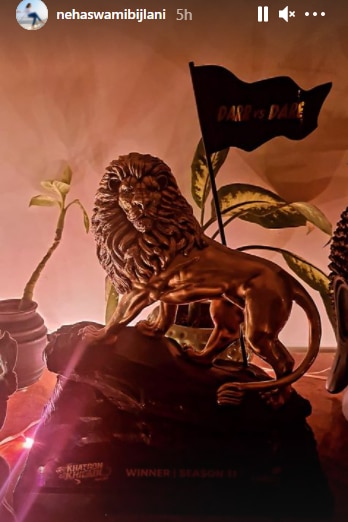 Neha Bijlani also shared a picture with Arjun Bijlani in another post and wrote, “I’m soooooo proud of you my Jaan… I know what you have done really.. you deserve all the happiness in the world.. @arjunbijlani (sic).” In the photo, the couple is seen complementing each other in black and white outfits. They are all smiles as they pose for the camera.

Interestingly, even before the premiere of Khatron Ke Khiladi 11, Rakhi Sawant had revealed that Arjun Bijlani had won the show. In June this year, the actress was seen interacting with the paparazzi in Mumbai. When asked about the contestants of KKK 11, she blurted out that Arjun Bijlani had won this season. This was after the contestants had returned to Mumbai after shooting for the stunt-based reality show in Cape Town, South Africa.

Check out the video below:

WHO WERE THE CONTESTANTS ON KHATRON KE KHILADI 11?

What is ‘hormonal belly’ and what can you do about it?