Irrfan Khan death on April 20, 2020, came as a personal loss to the nation and to the film industry. He is remembered as one of the finest actors of his generation and as an artist par excellence. So, on his first death anniversary, celebrities took to social media to remember him. Irrfan passed away after a long battle with a neuroendocrine tumour.

Sharing a photo of Irrfan, Arjun Kapoor wrote on Instagram, “The outstanding legacy you have left behind will always be cherished by all of us (sic)!” 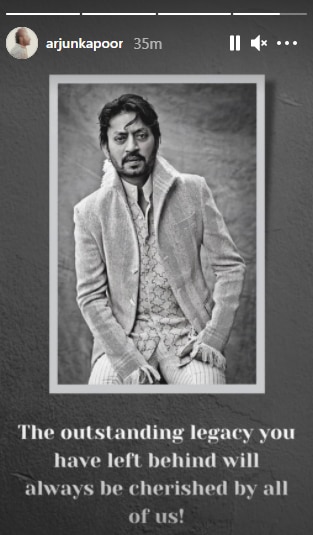 In her tribute to Irrfan, Dia Mirza wrote, “Love and respect always (sic).”

Randeep Hooda posted a black-and-white photo of Irrfan and remembered him. The actor wrote, “I suppose in the end, the whole life becomes an act of letting go. #Irrfan (sic).”

Babil Khan, who is still coming to terms with Irrfan’s death, wrote a heart-touching note remembering his father. “Chemo burns you from the inside, so to find joy in the simple things, like building your own table to write your own journals. There is a purity, I have not yet discovered. There is a legacy that has already been concluded by my Baba himself. A full stop. Nobody can ever replace him. Nobody will ever be able to. To the greatest best friend, companion, brother, father, I ever had and ever will have (sic),” he wrote.

He added, “I love you so much, for the rest of this chaos we are choosing to call life. I miss you, more than all that shah-Jahan/Mumtaz stuff; I would have built a space monument that could have taken us to the furthest parts of a black hole singularity you were always intrigued by, but I would have been there with you Baba, and we could have gone together, hand in hand. (Exploring the last mysteries) (sic).”

Irrfan’s last film, Angrezi Medium, released in 2020. He is survived by his wife, Sutapa Sikdar, and sons, Babil and Ayaan.

Why India’s TV industry is moving out of Mumbai

How to register for Kaun Banega Crorepati 13? Step-by-step process

Kangana Ranaut tests Covid positive, calls it ‘small-time flu which got too much press’

Mixing Covid-19 vaccines not a good idea: New study hints at more side effects but no safety concerns
10 hours ago