The International Day of Yoga is being celebrated today in India and across the world. Physical observance of the day is being held at 75 heritage and iconic sites in the country. Prime Minister Narendra Modi is leading the Yoga Day celebrations from Mysuru. The idea of the Yoga Day was first proposed by the Prime Minister in 2014. The first International Day of Yoga was celebrated the next year on June 21. The day is recognised by the United Nations.

Jun 21, 2022 09:26 (IST)
People Understood Importance Of Healthy Lifestyle Based On Yoga: Gujarat Chief Minister
Gujarat Chief Minister Bhupendra Patel and Union Minister of State for Finance Dr Bhagwat Karad led a crowd of nearly 7,500 people in performing yoga this morning at the Sabarmati Riverfront in Ahmedabad on the occasion of the International Yoga Day. “More and more people have understood the importance of a healthy lifestyle based on yoga and ‘pranayam’ after the coronavirus outbreak,” Mr Patel said addressing the participants.
Jun 21, 2022 09:01 (IST)
Yoga Day Live Updates: Officials Perform Yoga At Parliament 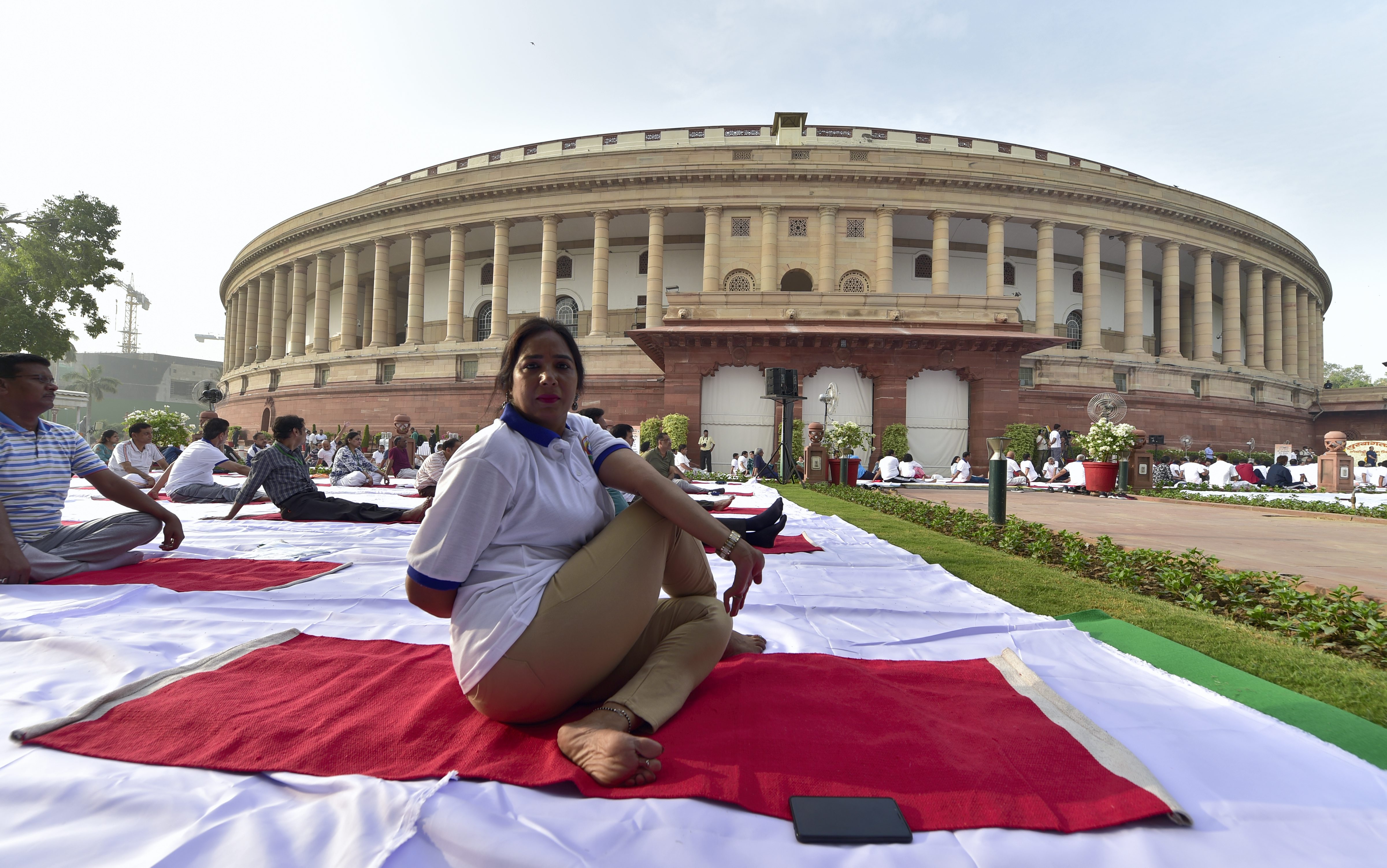 Jun 21, 2022 08:54 (IST)
Updates: Jammu And Kashmir Lt Governor Leads Yoga Day Celebrations At Dal Lake
Jun 21, 2022 08:49 (IST)
Live Updates: Power Of Yoga Is Power Of Unity, Says UN General Assembly President
The power of yoga is the power of unity for a healthier and prosperous future for all and it is here to stay, President of the 76th Session of the UN General Assembly Abdulla Shahid said, underlining that the practice offers a holistic approach at a time when the world emerges from the COVID-19 pandemic that triggered a deluge of anxiety and depression. Mr Shahid was addressing a special commemorative event organised by the Permanent Mission of India to the UN here on Monday.
Jun 21, 2022 08:47 (IST)
Live Updates: ‘Himveers’ Of Border Police Perform Yoga At 17,000 Feet In Ladakh
‘Himveers’ of the Indo-Tibetan Border Police (ITBP) practise yoga in Ladakh at 17,000 feet on 8th International Day of Yoga. 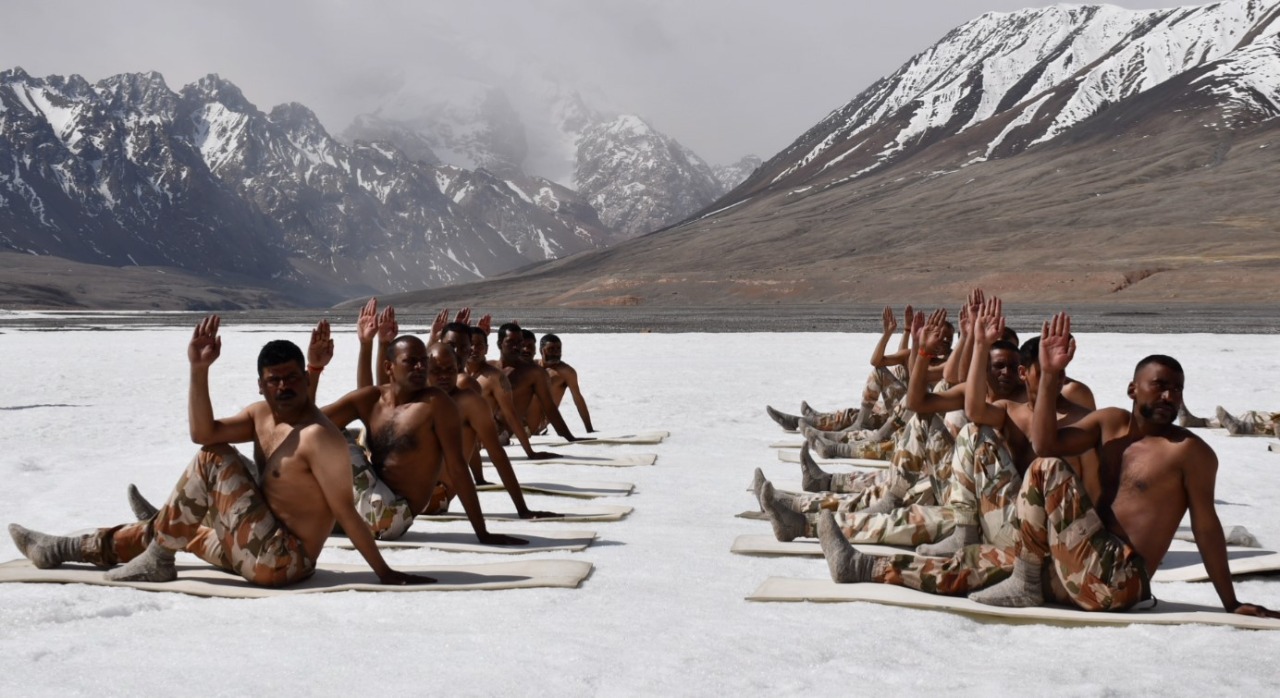 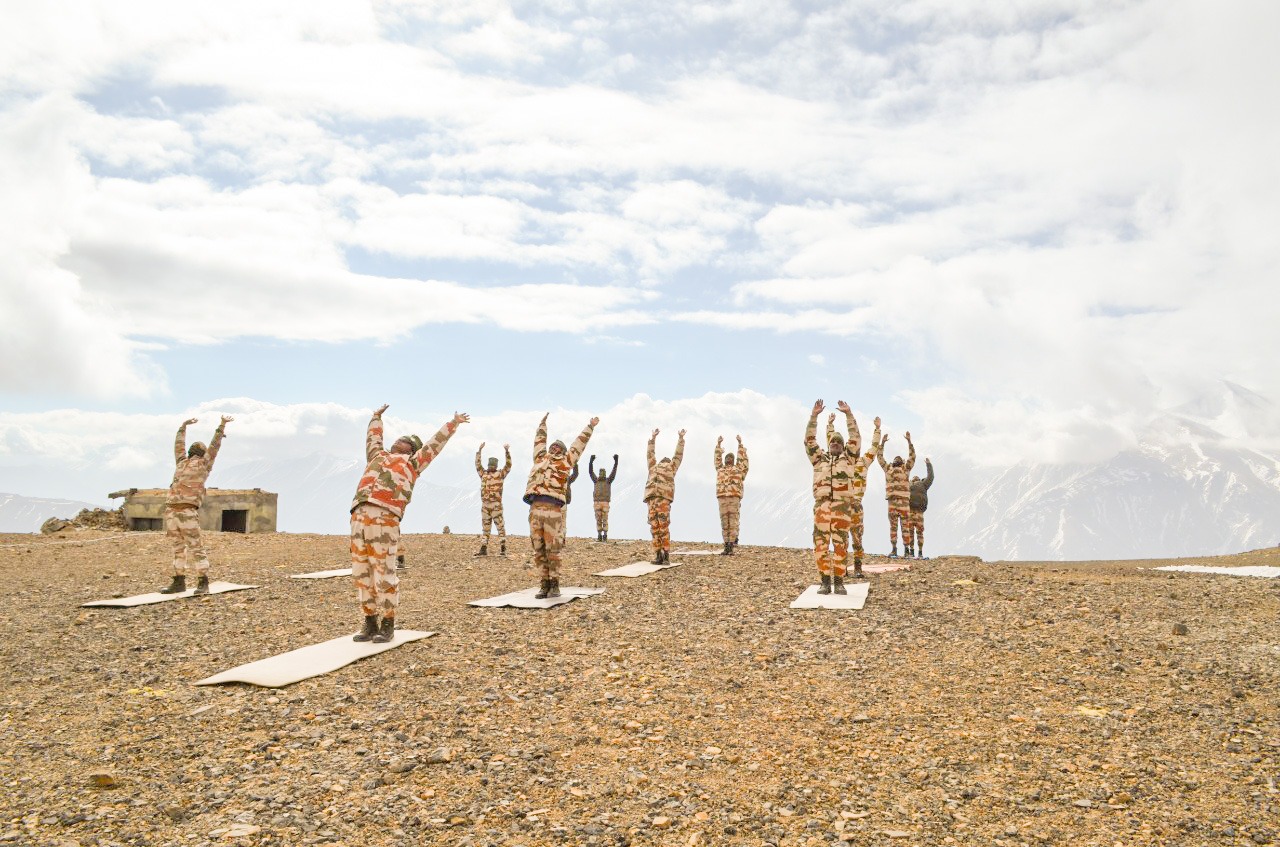 Jun 21, 2022 08:42 (IST)
Live: ‘Himveers’ Of Border Police Perform Yoga With Horses In Arunachal Pradesh
‘Himveers’ of the Indo-Tibetan Border police (ITBP) practicing Yoga with Horses at the eastern tip of the nation-Arunachal Pradesh at ATS, Lohitpur on 8th International Day of Yoga. 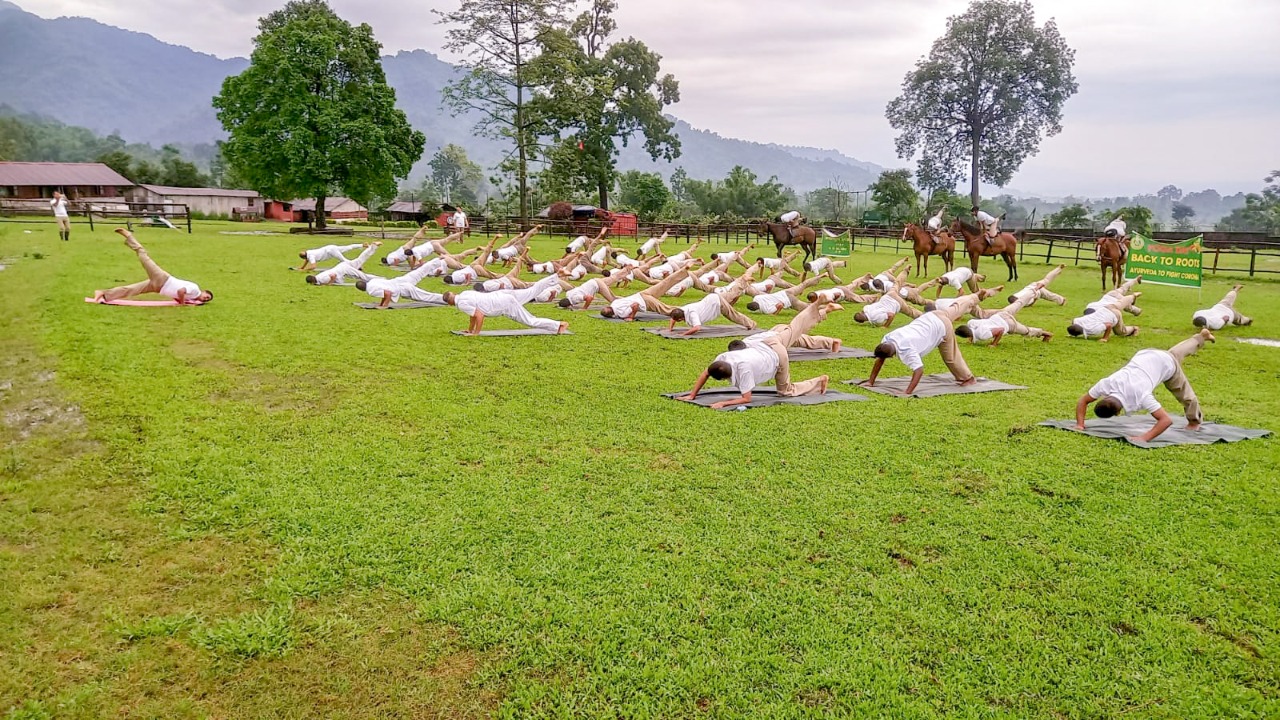 Jun 21, 2022 08:39 (IST)
I Learnt Yoga For Free, So I Provide Free Yoga Services, Says Arvind Kejriwal
“Each and every individual in Delhi must be healthy. Each of them should do Yoga. Children should do Yoga. I learnt Yoga in 8th standard. I learned it during my summer vacation at a nearby Yoga camp. We used to do all asanas as bodies of kids are more flexible…Some people criticise me for providing free Yoga services. But I learned it for free and that is why I will also provide it for free to others,” said Delhi Chief Minister Arvind Kejriwal.
Jun 21, 2022 08:37 (IST)
Been Told Delhi Has Highest Number Of People Doing Yoga In Parks: Arvind Kejriwal
“I have been told that Delhi is the city where highest number of people practice Yoga in Parks. But I am not satisfied. We need to take this number from thousands to lakhs. While we ensure best healthcare services for you, what we want is that you should be able to prevent diseases in the first place and things like Yoga will help that,” said Delhi Chief Minister Arvind Kejriwal.
Jun 21, 2022 08:33 (IST)
Yoga Day Live Updates: Yoga Should Become A Part Of Life, Says Arvind Kejriwal
“The solution to a lot of complex diseases has been found through Yoga. Yoga should become a part of life. Even a half hour of Yoga daily will be beneficial. Last two years during Covid also, Yoga helped people relieve their stress. Delhi government’s Yoga teachers did extremely well during these testing times They gave online classes to thousands of Covid patients. Yoga does not cure Covid but it helps in reducing the intensity of the disease. We also started the ‘Delhi ki Yogshala’ initiative to provide Yoga teachers for free to groups across Delhi. Now about 17,000 people participate in ‘Delhi ki Yogshala’ morning classes,” said Delhi Chief Minster Arvind Kejriwal.
Jun 21, 2022 08:30 (IST)
Yoga Day Live Updates: Yoga India’s Gift To Humanity, Says President Kovind
Yoga is India’s gift to humanity and it is a holistic approach to health and well-being, balancing mind, body and soul, President Ram Nath Kovind said today, greeting people on the International Yoga Day. He also asked everyone to make Yoga a part of their daily life and experience its benefits. “Greetings on #InternationalDayofYoga! Yoga is a part of our ancient Indian heritage. India’s gift to humanity, it is a holistic approach to health and well-being, balancing our mind, body and soul. I urge everyone to make Yoga a part of your daily life & experience its benefits,” President Kovind tweeted. 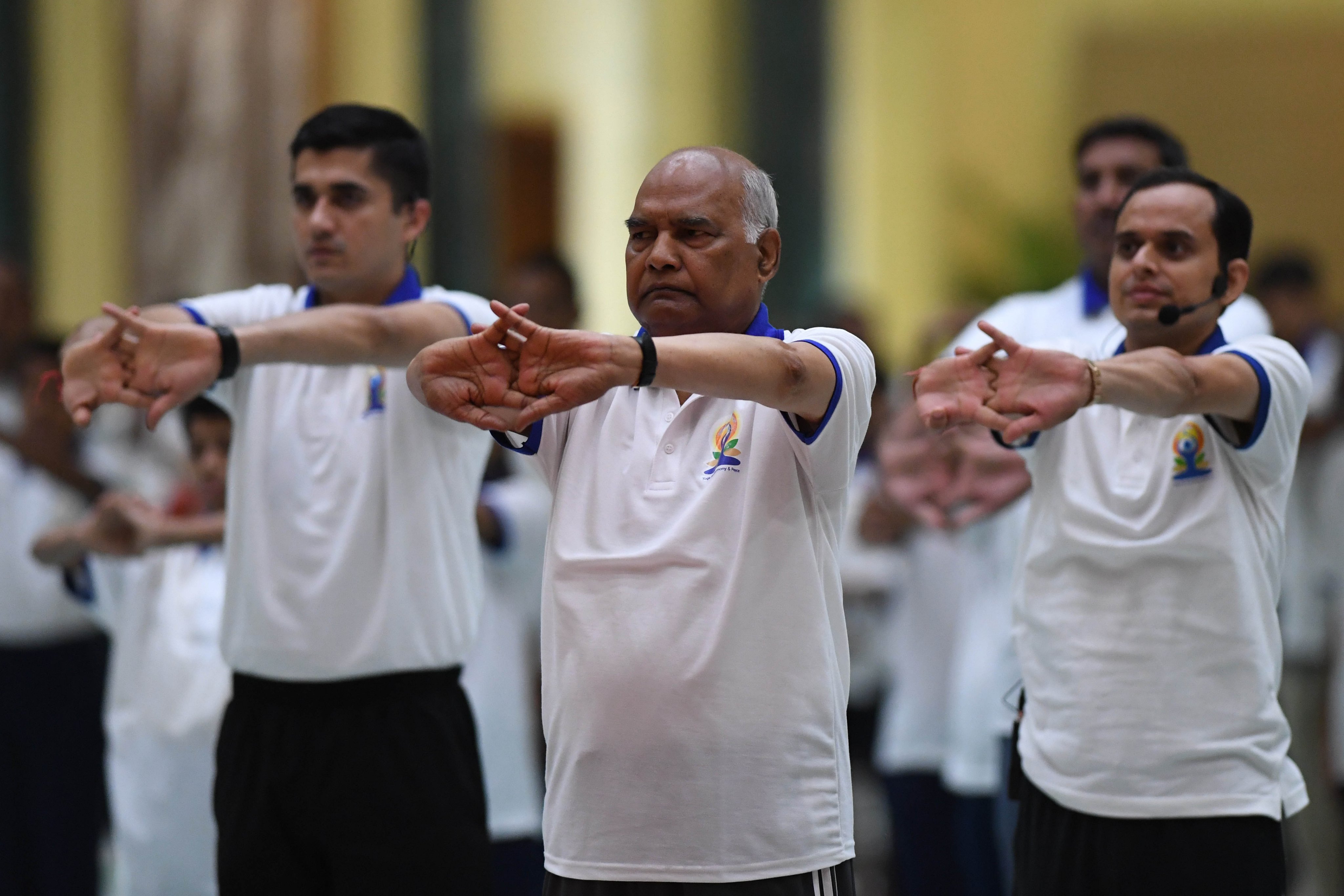 Jun 21, 2022 08:03 (IST)
Yoga Day Live Updates: Arvind Kejriwal Performs Yoga At Thyagaraj Stadium In Delhi
Delhi Chief Minister Arvind Kejriwal performed Yoga asanas along with hundreds of people at Thyagaraj stadium in Delhi on the occasion of International Yoga Day today. He appealed people to resolve for practising Yoga and Pranayam every day. Mr Kejriwal joined members of ‘Dilli Ki Yogashala’ along with his deputy Manish Sisodia at the stadium for the Yoga session. 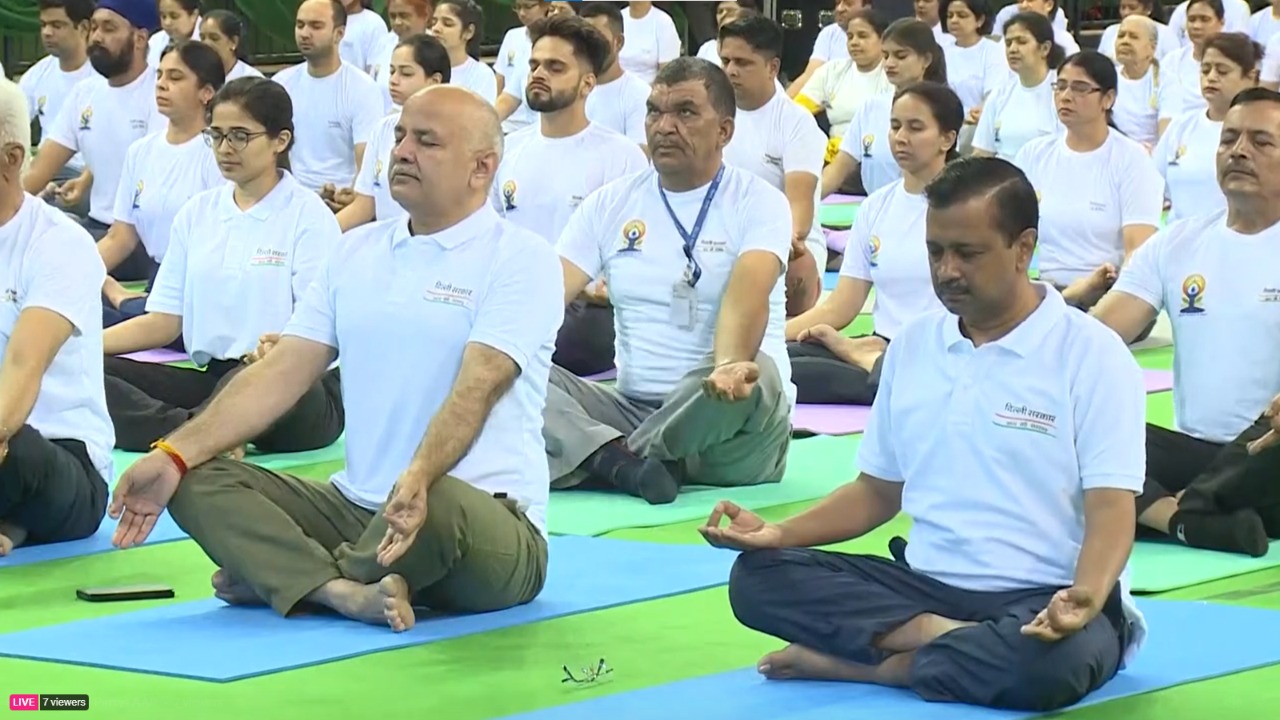 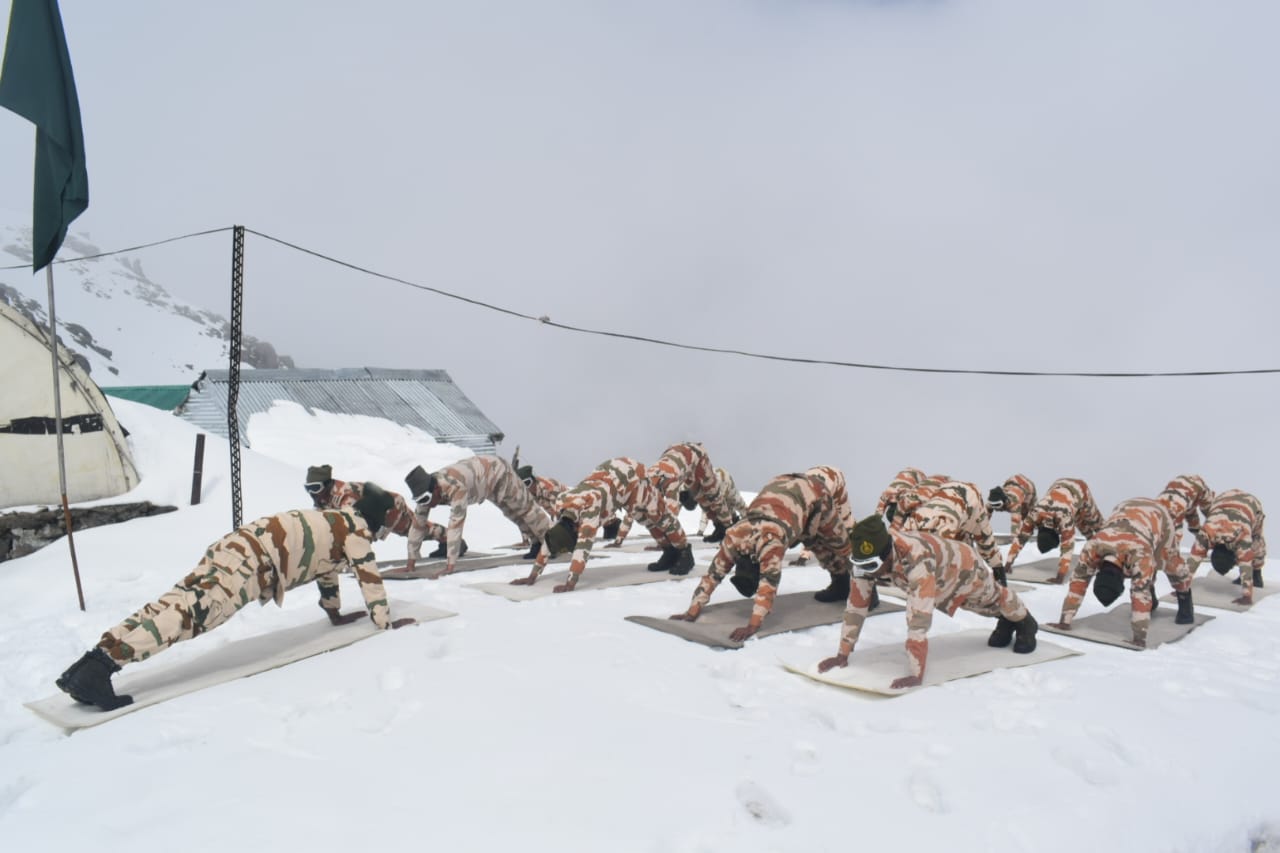 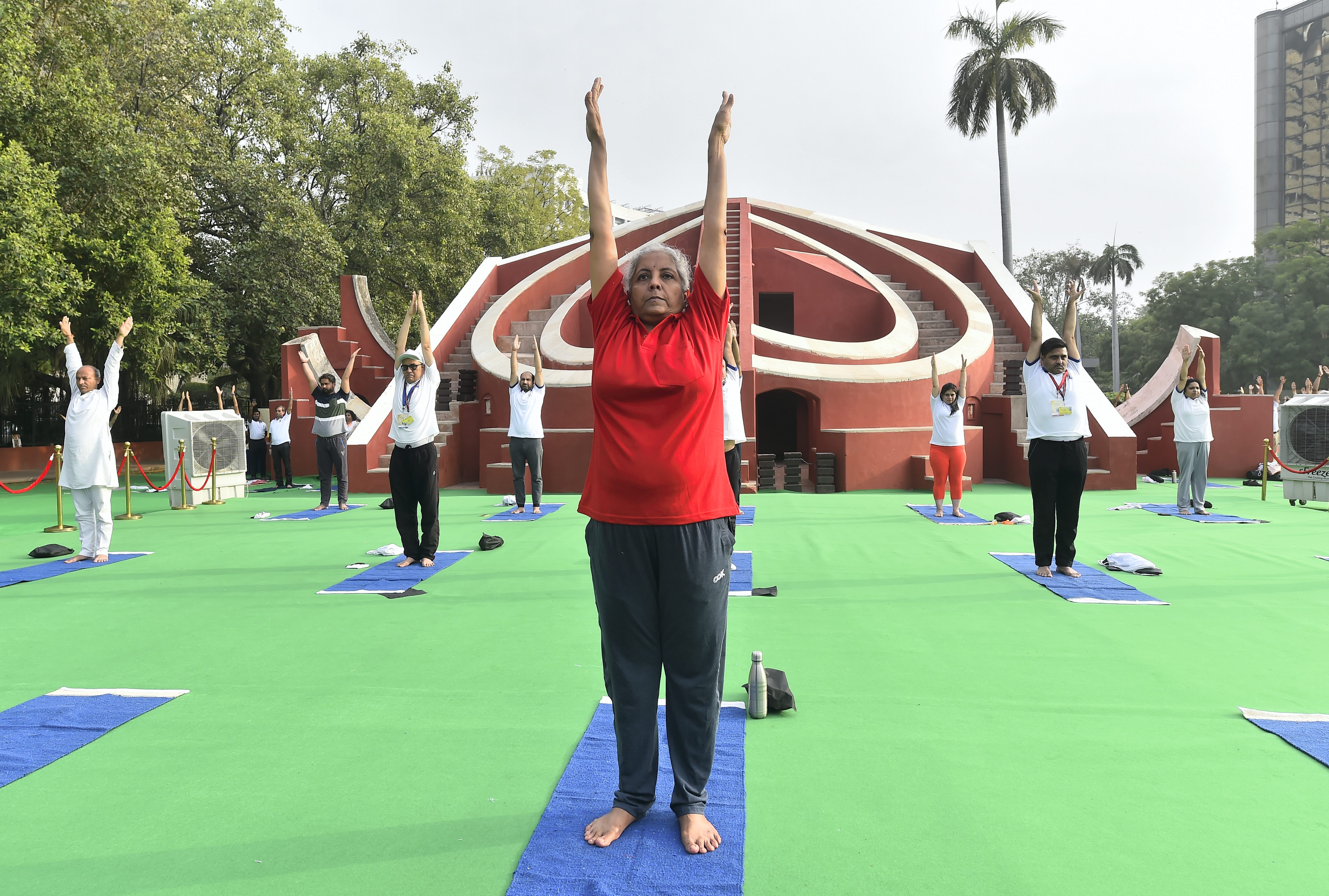 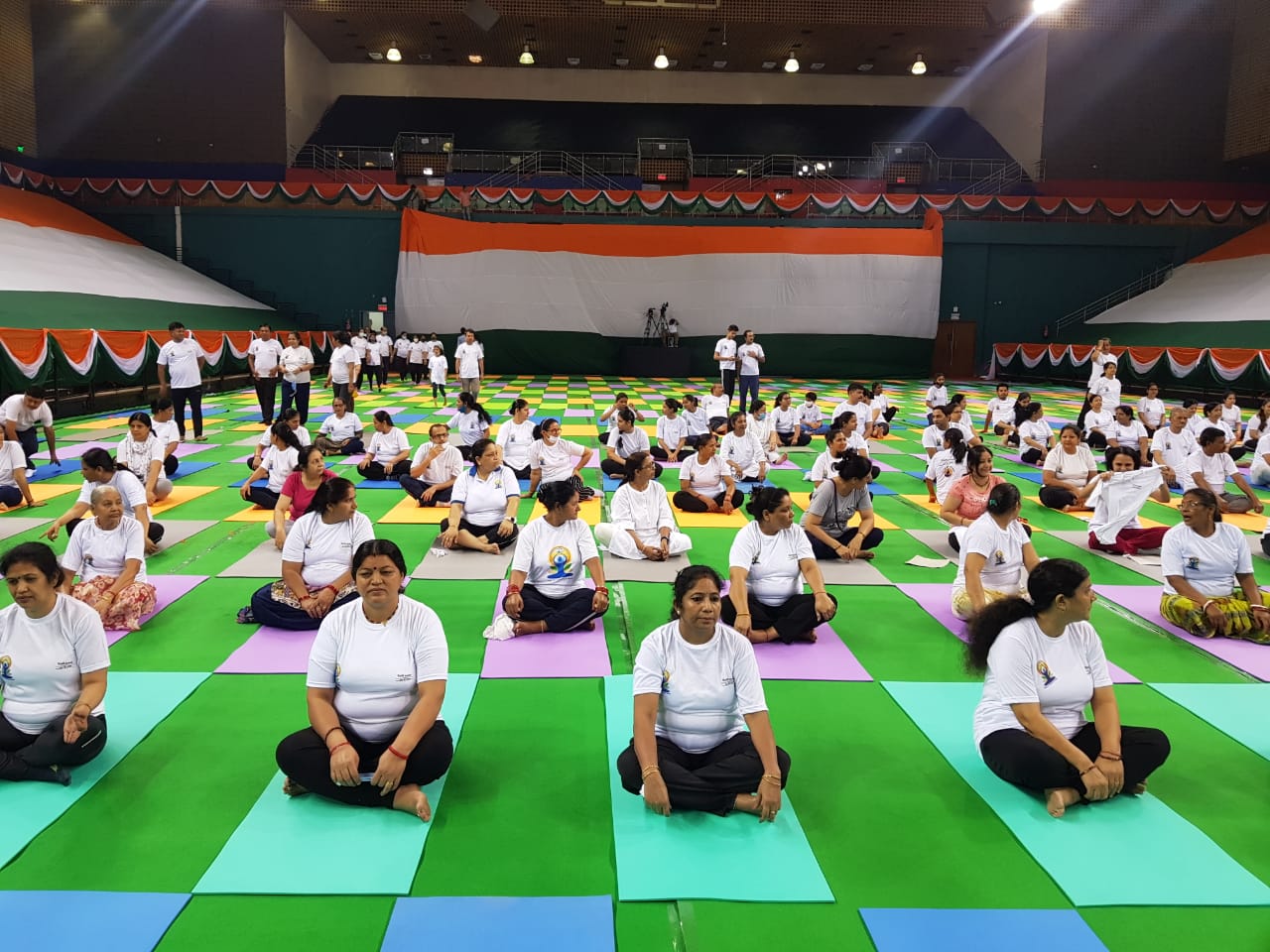 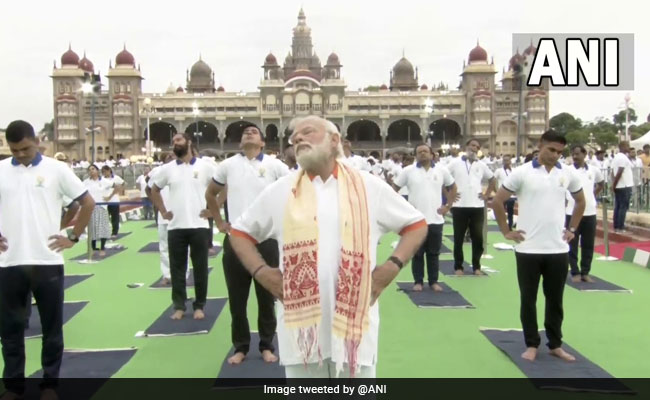 Jun 21, 2022 07:07 (IST)
Yoga Day Live Updates: Yoga Not An Extra Work, We Have To Live Yoga, Says PM Modi
“No matter how stressful we are, a few minutes of meditation relaxes us, increases our productivity. Therefore, we do not have to take yoga as an extra work. We also have to know yoga, we also have to live yoga. We also have to achieve yoga, we also have to adopt yoga.”
— Prime Minister Narendra Modi in Mysuru
Jun 21, 2022 07:04 (IST)
Yoga Day Live Updates: PM Modi Says Yoga Brings Peace To Our Universe
“Yoga brings peace for us. The peace from yoga is not merely for individuals. Yoga brings peace to our society. Yoga brings peace to our nations and the world. And, Yoga brings peace to our universe. This whole universe starts from our own body and soul. The universe starts from us. And, Yoga makes us conscious of everything within us and builds a sense of awareness.”
— Prime Minister Narendra Modi at Yoga Day celebrations in Mysuru
Source Link
READ  BJP MLA Bhupendra Patel to be sworn-in as new Gujarat CM | Top Developments

Yoga No Longer Just A Part Of Life, It's Becoming A Way Of Life: PM Modi

World's Biggest Cruise Ship Has No Buyer, 1st Voyage May Be To Scrapyard

Trump Wanted Justice Department To Back His Lie: US Panel On Capitol Riots

Cargo Plane With 9 On Board Crash-Lands In Russia, 3 Killed: Report