Covid-19 transmission in India is exploding at a rate unseen anywhere in the world so far. On Thursday, the country reported 3.14 lakh new cases, the highest single-day count for any country ever, and deaths to are mounting every hour.

Amid this, a new variant of the virus causing Covid-19 has been detected in West Bengal.

The ‘triple mutant variant’ (also being referred to as the ‘Bengal strain’ of Covid-19) is reportedly more infectious than other strains.

Reports suggest that while this variant is predominantly circulating in West Bengal, it has also been detected in samples from Delhi and Maharashtra.

Experts say at present there is no conclusive evidence to comment on the impact that this variant can have on vaccines but the presence of E484K mutation in it is a cause for concern.

E484K is a major immune escape variant and is also found in a number of emerging lineages across the world. Immune escape variants are those mutations that help the variant to evade the immune system and possibly result in compromising vaccine efficacy.

What is the ‘triple mutant variant’?

The ‘triple mutant variant’ is the second lineage of the SARS-CoV-2 virus to be identified in India. It is being called ‘B.1.618’ and is mostly circulating in West Bengal.

Earlier, a ‘double mutant variant’ of the virus was detected in India. It was officially named as ‘B.1.617’.

Explaining the new strain, Vinod Scaria, a researcher at the New Delhi-based Council of Scientific and Industrial Research’s Institute of Genomics and Integrative Biology (CSIR-IGIB), in a Twitter thread said the earliest sequence of this variant was isolated on October 25 last year in samples collected from a patient in West Bengal.

The most recent detection was on March 17.

While the lineage of this variant is primarily found in India, members of the lineage have also been found in the US, Singapore, Switzerland and Finland. 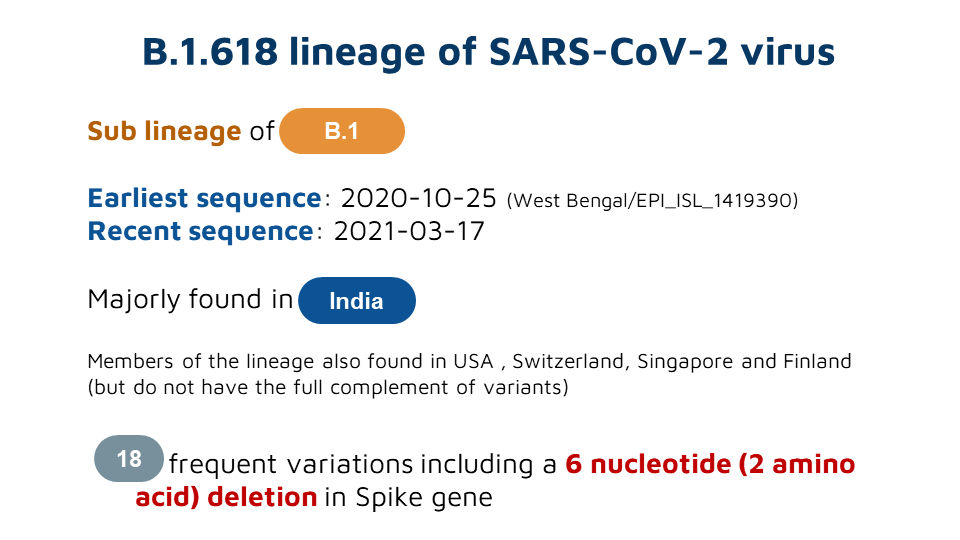 How fast is this variant spreading?

According to Vinod Scaria, the proportion of the ‘triple mutant variant’ has been “growing significantly” in recent months in West Bengal. He however adds that much is “unknown” about this variant and more studies on it are required.

In a report, The Hindu said the ‘triple mutant variant’ may comprise “as much as 15 per cent” of the genomes in West Bengal between January and March this year. But how dangerous is this variant?

An exact answer to this can’t be given at this point in absence of sufficient studies.

However, experts say this variant of the Covid-19 virus is more infectious than other variants.

In an interview with NDTV, Dr Madhukar Pai, professor of epidemiology at McGill University, said, “This is a more transmissible variant. It is making lots of people sick very quickly.”

In his Twitter thread, Vinod Scaria says we presently do not know the capability of the ‘triple mutant strain’ to cause reinfections as well as vaccine breakthrough infections.

Vaccine breakthrough infections are those cases where the person tests positive for Covid-19 after taking a vaccine against the disease.

Experts fear that the new variant may have an impact on vaccine efficacy because the new variant has the major mutation, called E484K, that helps it to evade the immune system.

This, experts say, can possibly compromise vaccine efficacy. E484K was also found in the Brazilian and South African variants of the virus.

“You may not be safe from this variant even if you had previously been infected by another strain, or even if you have been vaccinated,” Sreedhar Chinnaswamy of the National Institute of Biomedical Genomic (NIBG) told The Times of India.

In her interview with NDTV, Dr Madhukar Pai stressed that we need to “keep tweaking vaccines”. “For that, we need to understand the disease. But we need sequencing on a war footing.”

Meanwhile, Vinod Scaria too has stressed that additional experimental data would be required to assess the efficacy of vaccines against this new variant.

Is the new variant responsible for Bengal’s Covid spike?

While experts agree that the new variant detected in West Bengal is more infectious than other variants, but they say it is too early to conclude that it alone is responsible for the spike in Covid-19 cases in the state.

“At this moment, there is no conclusive evidence that this lineage drives the epidemic in West Bengal, apart from the fact that the number and proportions have been significantly increasing in recent months,” Vinod Scaria writes.

Speaking to The Hindu, Partha Majumdar, a geneticist and a former director of the NIBG, too said that while the new variant is spreading rapidly, it can’t be linked to the recent spike in cases in Bengal.

“Mutations play a role but as only 15 per cent of that infected carry the B.1.618, it cannot alone explain the surge,” he told The Hindu.

What we know so far: In a nutshell

Flying on Mars is possible: Here’s how small rotorcraft Ingenuity proved it

Mixing Covid-19 vaccines not a good idea: New study hints at more side effects but no safety concerns
4 hours ago